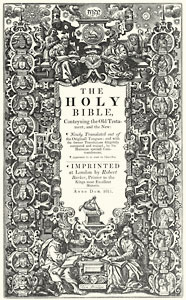 The 1611 King James Bible is described as one of the most important publications in history. King James I of England gathered the greatest religious scholars and linguists together for a new Bible translation in order to establish the most accurate and most dignified English translation to date. He appointed 54 scholars to work on the translation, and 47 worked in six groups at three locations for seven years. The 1525 Geneva Bible served as a point of comparison from which some of the 1611 King James Bible text was based.

Upon completion, the King James Bible was printed for the first time in 1611 by by Robert Barker, the king's printer. The Bible was a large scale 16 inch tall folio Bible. Because of the high cost and value, it was said to be secured to church pulpits with chains.

The 1611 Bible was appointed (or authorized) to be read in churches, which is why it is called the Authorized Version. The printing continued for the next year until most churches had a copy. 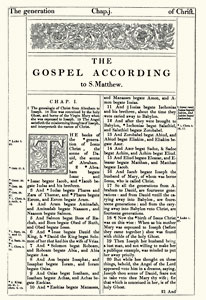 Modern printed King James Bibles marked as '1611' versions including those labeled as '400th year annversary' are often not in the same old English language as the original 1611 printing. Rather, they most often are the 1769 version changes directed by Benjamin Blayney from Oxford. Since its original publishing in 1611, hundreds of changes in vocabulary, grammar, spelling and punctuation have been made, which have served as an improvement in its readability.

See the comparison of 1611 vs 1769 here: 1611 version of Matthew 1:1, for example. The 1611 wording reveals the English language having a closer association with its Latin roots in 1611 than in 1769. I's in 1611 later become J's in 1769. The spelling of Jesus as Iesus reveals's the stronger association with Latin in earlier English. V's and U's were also later exchanged as the language developed. Some people find the syntax and archaic language of the King James Bible hard to understand. Others admire the beauty of the language and its poetic feel.

In the last 400 years, the King James version has made a tremendous impact on society, with its inspirational words that have not only encouraged numerous hearts and minds, but has offered hope for eternal life. Please celebrate with us the 400th year anniversary of this special book.